Front End VS. Back End Development: The Top 3 Differences - wonderIT 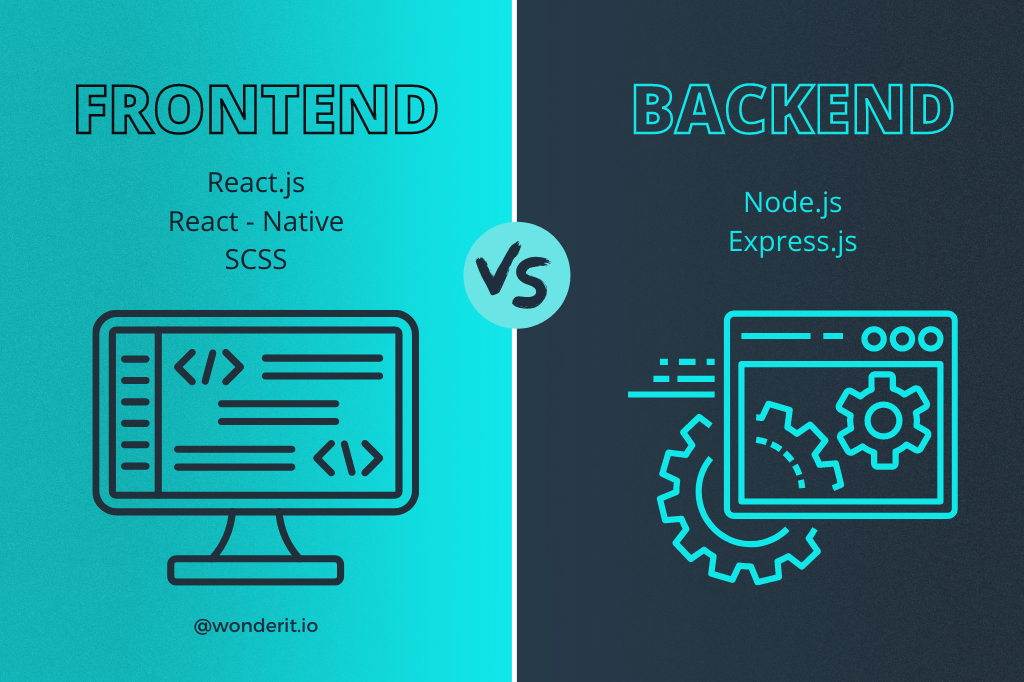 If you’re new to the programming world, then it’s easy to get confused with simple terms, such as front end development, back-end development, and full-stack development. The only thing that can make you even more confused is the programming languages that are used. It’s a whole new world, and it’s up to you to discover it at your own pace. Our job is to help you in your journey by providing valuable content that will make it a bit easier and a lot simpler.

Front end vs. back end development

Front end developers think about the user. They code and implement elements and functions that will be seen by the user later on. Think of it like ornaments in your house. You put them out there in order for people to see them and find them amusing. The same goes with front end developers. Their main and final goal is for the website or application to be fully functional and interesting.

These developers bring the visual designs created by UX and UI designers to life, ensuring that the website performs properly for the user. A static website, which is a website with set content that is displayed to a user’s browser exactly as it is stored, is one of the numerous ways you can apply front end abilities. If you come across a simple landing page or a tiny business website that doesn’t allow consumers to complete any interactive actions, you can come across a static website.

The main tasks of front end developers include:

Back-end development is concerned with the part of the website that users do not see. It’s what allows a website to be interactive. The back end of a website is also known as the “server-side.” Let’s imagine you’re the owner of a social networking platform. You’ll need a central location to store all of your users’ data. A database is a type of storage center, and popular examples include Oracle, SQL Server, and MySQL.

Databases are managed by a server, which is simply a computer that is located somewhere. This database, as well as the site content contained on it, will be managed by a back-end developer. This ensures that your social networking website’s front end elements continue to work properly when users read uploaded material and other user profiles.

While visitors do not connect directly with the back end of a website, they do interact indirectly with things that these developers are working on via a front end application. Back-end development includes storing and organizing data while also ensuring that the front end works properly.

The main tasks of back-end developers include:

Working on a different side of the site

Front-end development is a type of programming that concentrates on the visual aspects of a website or app that a user will interact with (the client-side). Back-end development, on the other hand, concentrates on the part of a website that users don’t see (the server-side). They collaborate to create a dynamic website that allows users to make purchases, fill out contact forms, and engage in other interactive activities while perusing the site. Netflix, PayPal, Facebook, and the Kenzie Academy website you’re on are all examples of dynamic websites.

Though there are variances in pay depending on whether you specialize in front or back-end development, it all boils down to your individual talents, hobbies, and abilities. You might find that one side of development appeals to you more than the other. If you’re selecting between the two, instead of focusing just on pay forecasts, consider which one gives you greater joy and satisfaction as a developer.

Back-end developers use programming languages such as PHP, C++, Java, Ruby, Python, JavaScript, and Node.js. They also have their own frameworks and libraries, some of which are Express, Django, Rails, Laravel, and Spring.

Hiring a front end developer and a backend developer can be a long and tiring process. You have to look for two individuals that will work together to provide you with a fully-functional project. Cut the time in half by looking for a full-stack developer, either a freelancer or a web development company. It’s less trouble and you’ll spend less time looking for the perfect pair of developers, as a full-stack developer will provide you with everything you need. Not to mention that you’ll pay way less than combining two separate paychecks, so it’s extremely budget-friendly.

4 Ways Developers Can Help Your Company